Apron of the Day and Odds and Ends

Yes, Friends, I went to Sears yesterday and forked out for a new Kenmore sewing machine.I had to: I was feeling as jittery about not having a working machine as I do when I don’t have computer access. It’s nothing fancy — I’ll probably lust as vainly for a Bernina as I do for Rafael Nadal — but, by gum it works! Here’s the result of today’s session at the machine. You’d split a gut if you saw my sewing setup. My dining room table is generous, but not if it’s being shared with 1) The New York Times 2) a man who’s set up for his crossword session, which includes a coffee mug, a coffee carafe,  an ashtray, reading glasses and the remains of a dish of potato salad3)today’s mail 4) a calico cat who likes to help me sew. She entertains herself by trying to slide her paw under the needle when it’s on the up, pulling it out before it nails it to the feed dogs.

I’m no lonely little seamstress toiling away in obscurity in a garret. Nor does my setup resemble the atelier at a great maison de couture! Here’s today’s yin/yang apron. 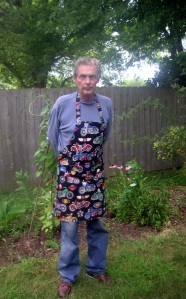 The Guy side. Here’s a closeup of the Guy fabric: 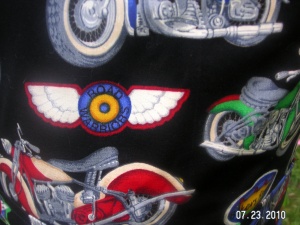 The Girl side, followed by a closeup of the very pink bonbon fabric: 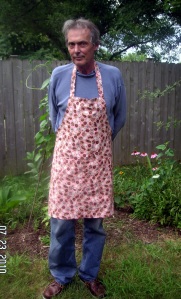 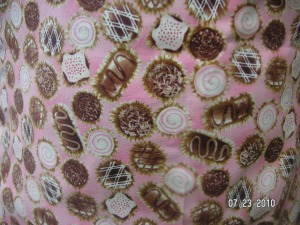 I listened to “All Things Considered” on NPR as I stitched and pressed and tried to find a clear square foot on the table. I was sad, not cheerful, when I heard that the great journalist Daniel Schorr died today. I swear I heard him two weeks ago being smart about something. Ninety three is a fine quiverful of annual arrows, and he did live quite the life. He was justly proud of being on Nixon’s Enemies List.

Here’s her take on the Grand Georgette Heyer:

I’m not going to tell you much about  Major Pettigrew’s Last Stand except that it’s about choices, easy and hard, in modern multicultural Britain. Simonson can write.

So hie thee to the library. I’m going to hie me to a martini.

Filed under A yard of fabric, Apron of the Day, Books, Library Card, Needlework

Tagged as Apron of the Day, Helen Simonson

8 responses to “Apron of the Day and Odds and Ends”